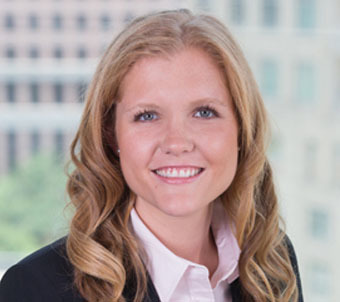 Meredith Elkins is an associate in the New York office of McKool Smith. She focuses her practice on insurance coverage, commercial, and intellectual property litigation. Meredith has represented clients at every phase of litigation, including trial and appeal. After joining the firm, Meredith served on secondment at Ericsson, coordinating discovery efforts for multiple complex patent infringement actions. Most recently, Meredith represented Halliburton in securing a take-nothing defense verdict following a two-week trade secret and patent infringement jury trial in Houston, Texas.

While attending law school, Meredith was an editor of the Texas Intellectual Property Law Journal, a student lawyer for the Children’s Rights Clinic, and a judicial intern for the Honorable Lee Yeakel, U.S. District Judge for the Western District of Texas. She was named Best Oral Advocate in the Championship Round at the 2012 Judge John R. Brown Admiralty Moot Court competition. In 2013, Meredith was inducted into the University of Texas chapter of the Order of Barristers. She was also a member of the University of Southern California Mock Trial Team as an undergraduate.