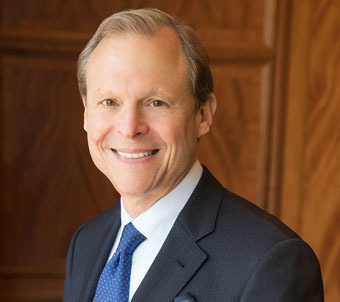 Steve Wolens is a Principal in the Dallas office of McKool Smith. His practice involves the representation of clients in complex class-action claims and commercial litigation. He is peer-reviewed as an AV rated lawyer by Martindale Hubbell.

Mr. Wolens served as a member of the Texas House of Representatives from 1981 until 2005. During his lengthy public service, he authored landmark legislation covering partnerships and limited liability corporations, ethics reforms, antitrust laws and electric deregulation.

Texas Monthly magazine named him as one of the "Ten Best Legislators" in Texas on six different occasions, writing in 2003: “At the end of the session, he passed the best ethics bill in the history of the Texas Legislature…One of the great legislators of the modern era logged another big win.”

Steve currently serves on the Texas Ethics Commission, which he chaired from 2017-2019. He was appointed to the Commission by House Speaker Joe Straus in 2016 and subsequently elected Chair twice by his fellow Commissioners. The Ethics Commission oversees compliance with laws concerning personal financial disclosures, political contributions and expenditures of state elected officials, judges, and certain local officeholders and candidates; it also reviews lobbying reports and activities.

Steve was born in Dallas and grew up in Corsicana, where his family founded the K. Wolens department stores. During high school, he served as a page in the U.S. Congress and worked in the Washington office of Congressman Olin Teague. He is married to the former Mayor of the City of Dallas, Laura Miller. They have three children.

Steve led a national effort to hold the internet travel companies (OTCs) accountable for hotel occupancy taxes that were not remitted to governmental authorities as required by local ordinances and state law. He was a lead attorney on behalf of San Antonio and 172 other Texas municipalities against the OTCs for delinquent occupancy tax payments. The class action was certified and later went to a successful verdict in 2009, resulting in an $84MM judgment. The unanimous jury verdict was vacated by the 5th Circuit on Erie principles, http://www.ca5.uscourts.gov/opinions/pub/16/16-50479-CV0.pdf. Steve has represented the State of Hawaii and the City of San Francisco, among other governmental entities, in similar litigation.